Showing posts with the label SAHM
Show all 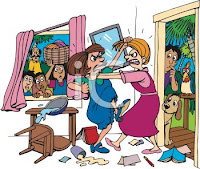 ﻿﻿﻿﻿ Apparently there is a war going on between Stay at Home Moms ( SAHM ) and Working Moms (WM). Vocabulary is important though. My characterization of the war may invite some attacks. The SAHM resent the implication that they do not work and sit around eating bon bons . A more accurate description is that it is a war between mothers who earn money outside of the home and those who do not. The self-appointed spokesperson for the SAHM crowd is none other than Ann Romney . What are we fighting for??? Unlike most wars, this war started with words not guns. Apparently a political strategist had the gall to say that Ann Romney “has not worked a day in her life”. Imagine someone suggesting that a mega rich woman hasn’t worked hard! Mrs. Romney became outraged. She got on Twitter . Then she declared that raising five sons is indeed hard work. She also said that her "choice" to stay at home should be supported because as Oprah says, “being a mom is the hardest j
6 comments
Read more

Lessons for Working Moms: Nobody Can Replace You!

"﻿ More stay-at-home mothers give themselves better marks as parents than do mothers who work outside the home..."  Survey Highlights Conflicts for Working Mothers As a working mom I appreciate that life is full of compromises. I work so that I can provide for my daughter. And I feel guilty about being away. Tonight I came to a realization working isn't the problem. It is the time that I spend away from my daughter that causes me conflict. When did work start consuming me instead of being a way to make a living???
Post a Comment
Read more
More posts