Showing posts from February, 2010
Show all

(Below is a poem that I wrote a few years ago.  Even though I had a fab Valentine's Day this year, I thought I'd share!) Chocolate candy exchanged And cards everywhere Magazine ads Saying love's in the air Deliverymen scrambling to make their deadlines This is a day that many despise… Men feeling pressure to make the big play Women keeping score on this special day Everyone tense to make sure they do right Many a couple will get in a fight… Expressions of love on all of the channels Easygoing women turning most anal Singles believing that they are now alone Walking single file through the love zone… The winter transforms into a sea of red Some give gifts to get (her) into bed Many wishing real hard for tomorrow to come Returning life back to normal for everyone… When the door knocks When the phone rings When we’re feeling sad We simply remember these Valentines Things and then we feel really bad!
2 comments
Read more 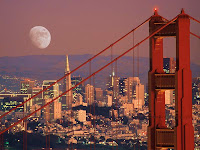 I landed in San Francisco famished, because I am Chatón and dashed out of the house without breakfast and decided to eat two oranges, some cashews and Swedish Fish on the plane. My ability mentally calculate calories is impressive. So, even though I know that nuts and candy do not constitute a proper breakfast, I intentionally resisted the overpriced, over fat, highly caloric sandwiches that they were selling in Coach. Instead, I indulged in the vodka that I had in my bag and the complimentary cranberry juice . I will resist the urge to describe the disappointment that I felt being relegated to Coach for a cross country flight. However, the foot rub offered by my seatmate did add some levity to the trip. It probably would have been an even better trip had I taken him up on it. But how would I have explained that to my man??? Anyway, upon arrival I was very hungry and a little shaky. This was probably because of the sugar rush. And while I was tempted to satisfy the urge by
4 comments
Read more
More posts