Showing posts with the label Dilma Rousseff
Show all

A Peek Into the Life of a Working Mom: Celebrating International Women’s Day 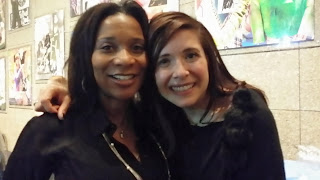 “ I hope the fathers and mothers of little girls will look at them and say yes, women can .” - President Dilma Rousseff, victory speech, October 31, 2010 Saturday was “ International Women’s Day ”. And it was my great honor to attend the premiere of “Madame Presidenta: Why Not U.S.?” at the Carnegie Museum of Art.   This documentary was written and directed by Heather Arnet of the Women and Girls Foundation .   It focuses on the ascension of Dilma Rousseff to the presidency of Brazil and questions why the United States has yet to elect a female president. ﻿ Me with Heather Arnet The documentary ended with a discussion of eighteen developed countries that have had female presidents and noted that these countries all have rewritten their constitutions to include women and their rights. They also have progressive policies that include things that American women have tried to gain for years—equal pay for equal work and mandatory paid maternity leave . Indeed, Brazil
Post a Comment
Read more
More posts