Showing posts with the label Cougar Town
Show all

" It takes a village to raise a child ..." African Proverb I believe I saw a "Supermom" once, but I think it was an illusion...  I recognize that I am not the most organized person known to man. I had a packed schedule before becoming a mom and having a child did nothing to decompress it.   Like most working moms who practice law I am pulled in a host of different directions and I suffer from the malady of trying to do too much.   I’ve chronicled my journey here where I’ve discussed my speaking engagements, blogging and networking events.   I also had the nerve to get knocked up again. As I write this I am on the eve of becoming about 30 weeks pregnant.   I just learned from my OB’s office that I am beginning the phase of going to the doctor’s every two weeks. As if I needed yet another “mandatory” commitment…   What I need instead is a road map to try to navigate my way through my house. Andre has been remodeling our bathroom and decided to re-organize t
Post a Comment
Read more

Apparently, I live in “Cougar Town”… 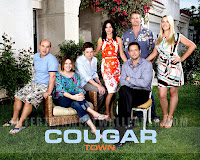 The other night I watched Courtney Cox ’s new show “ Cougar Town ”. A “cougar” is a middle aged woman who is on the prowl and tends to date much younger men. The show stays the course. Courtney plays a forty year old divorcée who is scared to be alone and is searching for love. In the first episode she takes home a guy who is in his twenties and gets to “know” him. The show is full of clichés about the plight of older women on the dating market, middle aged men who are only interested in dating younger women, and how older women are always on the prowl. The show may only last one season, but the topic is intriguing. Demi Moore Has Shown Women that Dating Younger Men is Possible Demi Moore and Ashton Kutcher inspire women around the globe. Even though she is nearly old enough to be his mother they are married; he is hot; and they look really happy. The appearance of love tends to quiet the critics. I don’t have to look at celebrities to understand. Two of the happiest mar
Post a Comment
Read more
More posts