Showing posts with the label Myth
Show all 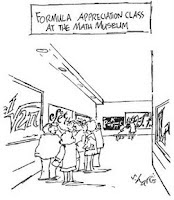 Who knew that math could be so sexy?! On August 12, 2007, the New York Times ran an article entitled, "The Math, The Myth , The Sex ", written by Gina Kolata . Like many whom have written about sexual mores, Kolata discusses the significance of “The Number”. We all know that men are from “Hornyville” and women are from “Chasteville”, right?! Some of my male friends even attribute the differences between the sexual practices of men and women to science. However, Kolata challenges their scientific theory with mathematical principles. As I read the article I became intrigued. The first thing that I thought was, had they applied math to sex when I was in school, I would have been a better math student! The article is based on something called "the high school prom theory", which contends that it is mathematically impossible that the average number of sexual partners had by men and women varies significantly. Rather, the "high school prom theory"
Post a Comment
Read more
More posts