Showing posts with the label interracial relationships
Show all 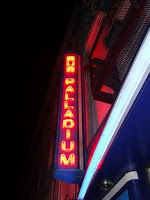 Funny things happen in Chatón’s World… Imagine two Black women explaining the benefits of remaining with his White wife in a club. It sounds hard to believe, but that is exactly what happened this past Friday night. Mind you, he sought us out, full of inquiry and intrigue. He sat next to me and asked, “Where are all of the African American professionals in Pittsburgh?” I imagine that he thought that his question would bond with us. However, it instantly he made me suspicious. Anybody who has lived in Pittsburgh longer than two days understands that Black professionals can be hard to find. I mean, we’re here, but we’re a small cohesive group. And unless you’re at the “Black club” or rolling with a crew, you can’t expect to see a lot us while you’re out. Instantly, his question made me conclude that he was visiting. However, he confessed that he lives and works in town. He also graduated from the University of Pittsburgh. Given those two facts it seemed most unlikely tha
Post a Comment
Read more
More posts